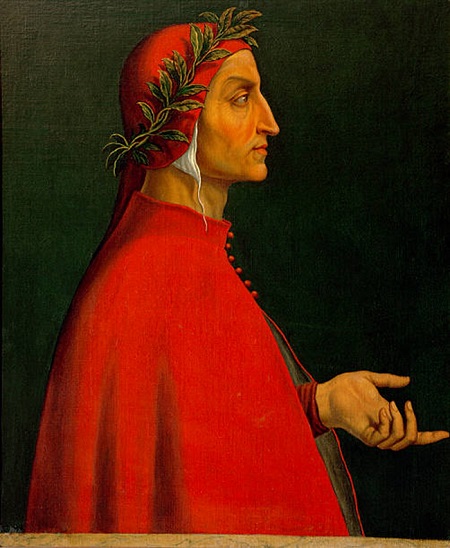 In 2021, we mark seven hundred years since the loss of one of the symbols of literature and Humanism, and arguably the greatest and most influential poet of the Western world - Dante Alighieri (c. 1265 – 1321). It would be a difficult task for one to find an educated person that hasn’t heard of that name and that’s not a result made by an elaborated marketing strategy. In fact, Dante wasn’t so popular among his contemporaries and the following epoch. His best-known work – Divine comedy – was considered too “medieval”, tragical, and rough for the standards demanded by the rigorous and Classical Greece oriented criteria of the Renaissance. It was during the Romantic era, centuries later, that Dante was re-discovered and awed as one of the most important foundations for establishing the universe of Literature as we know it today. Along with Geoffrey Chaucer and Giovanni Boccaccio, Dante was one of the first poets who published in vernacular language instead of Latin, which was the common one among the scholars and intellectuals at that time. In 13th-14th century Europe that was regarded as a revolution and indeed, it was. For, it made it possible for ordinary people to read and learn in their mother tongue, and not long after that, it gave confidence to them to create and express themselves in their natural verbal patterns.

Dante Alighieri was supposedly born in 1265. All the information we’ve got about his early life comes through allusions inside his works. There is not a lot about his education but most probably he was studying at home or at a chapter school attached to some monastery. He was devoted to his native city – Florence, spending most of his life there. During this part of his life, he was a cavalryman fighting against the Ghibellines (a political party in opposition of the Guelphs, in which ranks was Dante). He is also recounting about his adored teacher Brunetto Latini (famous Italian scholar and early humanist, who wrote one of the first encyclopedias on vernacular language) and about his friend Guido Cavalcanti, as well as the poetic and political situation surrounding him and shaping his future career.

Another fabulous fact about this period of Dante’s life was his first meeting with Beatrice – the famous muse that inspired Dante throughout his life and especially his first poetic work – Vita Nuova. Dante describes that meeting at the age of nine as love at first sight. He didn’t even utter a word to her. Later, they were meeting each other by chance on the streets of Florence, only occasional salutations between them. In Vita Nuova (“The New Life”), most probably written around 1293, Dante dedicates most of his poetry to Beatrice and their seldom meetings. The young poet kept his admiration for her hidden. The final of the books is occupied with a heart-breaking mourn over her actual death and the anticipations of future writings about her.

In 1295, Dante became a member of the guild of physicians and apothecaries, which led him into more active political involvement. The times were intense. Florence and its ruling class – The Guelphs divided once again into two parties – The Blacks and The Whites. Dante was part of the latter, who took the governance and exiled the others. However, by 1300 Dante had come to opposition to the new Pope Boniface VIII and his political and territorial ambitions. That led Dante to experience the biggest crisis of his life as later being exiled from Florence. He was accused of crimes he didn’t commit, even sentenced to be burned to death because of his views that the empire does not derive its political authority from the pope.

During the first years of his exile, Dante was active among the other exiled White Guelphs but their aspirations to organize and conduct a military return to Florence and take over the governance were all in vain. There wasn’t hope among the other exiles as well – The Ghibellines. The situation led Dante to growing disillusionment and he decided to prove the worthiness of his views in his writings. In that period, he composed two books – Il Convivio (c. 1304-07; “The Banquet”) and De Monarchia (c.1313; “On Monarchy”) as well as a lot of political epistles.

In the Convivio Dante builds the bridge between his political thought and his perception of human nature and blind will, which have to be guided by reason. The pope’s appetite for secular power was in contradiction with his role as a spiritual guide and the lack of a strong empire and worldly order and laws resulted, Dante’s speculated, in the political and social chaos of the time.

In his later work, De Monarchia, Dante elaborated upon his ideas from Convivio, bringing back his arguments that the Roman Empire should not derive its political authority from the Pope. At the conclusion of the book, Dante assures that he does not mean “that the Roman government is in no way subject to the Roman pontificate, for in some ways our mortal happiness is ordered for the sake of immortal happiness” but rather, that there are two images of paradise – earthly and heavenly – and we should not waste the one for the sake of the other.

The Divine Comedy is Dante’s best-known and arguably one of the most famous works of literature in the history of western culture. It was written in the period 1308-1321, just before the death of the poet. Although, the plot of the poem is relatively simple – Dante (as a main character) takes on a transcendental journey through Hell, Purgatory, and Heaven – the structure of each realm and the philosophical, moral, historical, and aesthetic implications are quite complex. Divine Comedy adopts the form of the classical epic poem but the content and ideas are rather Christian. The eternal soul that ascends towards the divine glory and love. Nevertheless, it pays homage to classical thought represented by the guide of Dante in the first two parts – Virgil. The famous Roman poet leads the way of Dante and introduces him with the necessary understandings in order to go beyond the sin and confusion of the mundane world. Then Beatrice, the muse of Dante and personification of Christian virtue, guides the poet in the final part, where he achieves the blissful light of Christ. The story goes as though Dante wants to persuade us that to reach the integrity of Christian morals, one should first pay attention to the lessons of the ancient Greek wisdom.

Replete with both historical and fictional figures, rich with allegories and metaphors, Divine Comedy reaches the finest and most graceful poetic language and stylistic artistry of late medieval poetry. More than 700 years later, it still fascinates the mind of the readers and provides the modern “myth” and culture with a vivid and inspirational treasury of both poetic archetypes, aesthetic power, and moral insights.

We have 25 guests and no members online